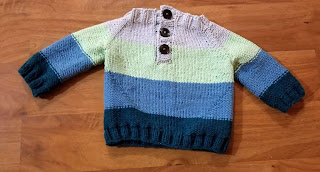 Naomi made her first sweater!  She figured she would try a raglan sleeve first.  This is for a baby but I cautioned her to make larger sizes.  But this came out cute!  Cute colors, nice style.  She's so proud of herself, she's been wanting to try this for a long time.

Also had lunch with some old buddies from group.  Curtis, Teresa, Margaret.  Fun!  We told lots of stories and laughed.  I see Curtis from time to time, hadn't seen Teresa or Margaret for awhile.  Curtis organized the lunch to celebrate 10 years since a serious illness but we didn't talk about it. 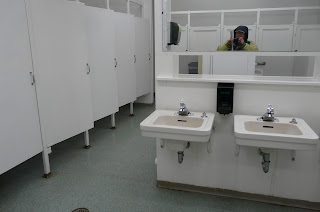 A flashback to the mid 2000s when I regularly went to Eugene watching Oregon softball (I won't lie, it was fun).  Before their current softball field "The Jane," they played at Howe Field which I maintained was the oldest field in D1 softball.  No bathrooms.  When I got there, they were using porta-potties.  Really?  The proud UO athletic department which prided itself on its over the top athletic facilities was having their own fans and fans from other major conferences using porta-potties?  Are you kidding me?  Howe Field was right next to ancient Mac Court (they've since replaced it with a huge fancy 100+ million dollar facility.)  OK, I believe that Mac Court was held up by the cockroaches, bit it had flushie bathrooms.  Right next to the softball field.  OK, maybe they had not been remodeled much since 1923 but they flushed.  I mounted a campaign to get the Mac Court bathrooms opened.  And won.  Here am I taking a picture of the Mac Court woman's bathroom, wearing Suzie's letter jacket among other layers for the Eugene spring rains.  I talked to all the fans as they surveyed the bathrooms with a bit of dismay.  "Go talk to the event people and thank them for the Mac Court bathrooms, they're clean and they flush."

The Jane is beautiful and has plenty of flushies.  But something is always lost with a new facility in the fan experience.  Actually Howe Field had a lot of negative fan experiences but you could do whatever what you wanted and nobody cared.  The Jane has actual event staff (imagine that) and rules. 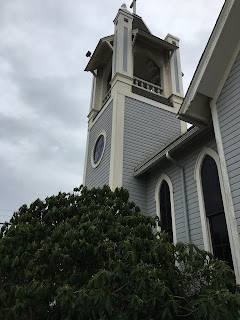 A shot of Coupeville United Methodist Church in the historic section of Coupeville on Whidbey Island.  Dennis great grandfather reportedly was the minister here.  Grandma Anne did a lot of geneology work but she sent it to a cousin.  What cousin?  Don't know.  This really was a an impressive church in good repair. 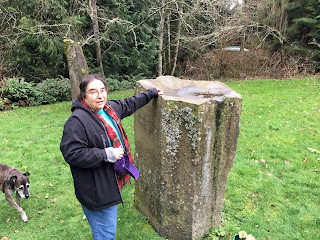 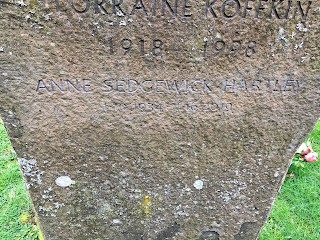 Dennis had arranged for Grandma Anne's name to be carved on a big stone near the ash garden where we buried her ashes (in the background).  It's hard to read the name but it's all there

Over time it will be easier to read.  Dennis had not been to the cemetery in Langley since the name had been carved.  He wanted to go so.  Why not today, I said?  We can even take the dogs (we have seeing-eye dog standard poodle Cash staying with us).  Actually I said it last night, he agreed.  This involves a ferry to Whidbey Island

You can see placing a stone on the obelisk with her name.  Apparently it is a Jewish thing but I was always taught that when you go visit a grave, you leave a stone on it to show that you have been there.  That you have remembered.  So I'm putting a stone on it.  I could have cropped Teddy out of the picture but I didn't.

The dogs had SO much fun in the cemetery, they ran and ran.  Then we bought a pizza (because you do in Langley) and at it outside in a park.  Then to Coupeville about 25 miles away.  Dennis wanted to see the church where his great grandfather served as minister.  We found the church but nobody was there. 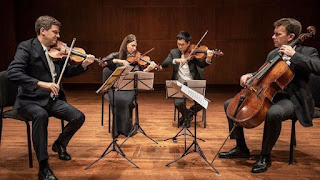 Last night, I got the opportunity to attend an all Beethoven Chamber Music concert.  My friend Lee called and said they were attending the concert that very evening (in a little over an hour) and had an extra ticket.  Would I like to go?  Turns out I had dinner all sussed (second time in two days I've used that word) out and ready to cook.  Sure, I'll go, I told her.

And so I did.  I made dinner right away and was wearing the clothes I had gone to Temple that morning.

They have a recital before the main concert.  In this case it was a very young red headed young man who played some Beethoven sonatas.  So cute and so excellent.  When he walked out David and I both said at the same time "He's just a kid!"  Lee said, "I just know his mom is around here, look for a red-haired woman"  We went out the side door and there she was!  Funny.

The same quartet, the Ehnes quartet (pictured above) played all three string quartets.  I never knew that string quartets could be like modern dance.  All of the members moved around a lot and interacted with each other.  They would bounce and stretch and exchange looks and move towards each other.  Very energetic.  Amazing to me that they can all stay together during such long complex pieces.  I found that I understood many of the words describing the movements from previous training so I could follow along.  Who knew?

Delightful, thanks for the opportunity! 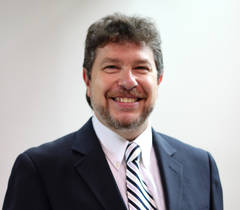 Cantor Victor is the Hazzan or Cantor  of the Reform Jewish congregation to which we belong.  He has become our favorite.  Just from watching and participating with him.  He is Argentine so everything has a little latin lilt.  A tremendous voice and a huge knowledge of music.  Plus he's such a presence in the service.  Last week Dennis said how impressed he was about how he did the handoffs and keeps everything going.  Later last weekend we got a notice that Cantor Victor was leaving.   Waaaah!  Why?  Where is he going?

Dennis and I were there this morning for his mother's yarzeit.  Also two young women for their b'nei mitzvahs.  Beth Am has always been known for their music, they had their choir and other musicians there.  And Cantor Victor.  I asked around to people who might know.  What was the deal?  Either they didn't know or they weren't talking.  I don't have strong enough relationships to suss this out.

So I still don't know.  I guess it will come out eventually.  Add what does it really matter?  He will not be there when I go to Temple whether he's going to another organization or another city.  We will miss him.  But wish him well.

He was also teaching a small class about Kabbelah which only met once/month.  Don't know what will happen with that.  Kabbalah Kaput saw Dennis. 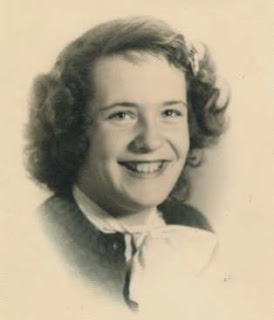 Today is Anne Hartley's yarzeit, the anniversary of her death.  My husband's mother.  One year ago today.  Dennis has marked it in this way on the calendar and he responded favorably to the Temple's request for donation.  He wanted to hear her name read from the bima (just as I do for my mother and father).  He's got something going on Friday but we decided that we would go to Saturday morning services.

He also sent out a heartfelt post to his immediate family which his brother Bryan sent around to other family members.

Interesting, when we talked this evening, the operational difficulties of her last days came to mind. 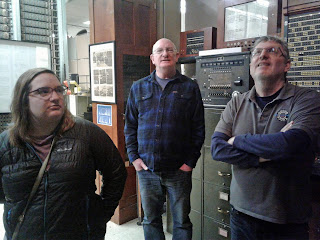 For his birthday, Dennis wanted to go to a telephone museum.  For years, he had been driving past this non-descript 1960s era building with a sign that said a telephone museum was open Sunday afternoons.  He stopped in there the other week and loved it.  All this phone stuff, all these things from our past that we've forgotten about.  They have a lot of it working including a working switch set that was operational from the 1920s until the 1960s.  They claim it's the only one working i the country.  Sarah, a young woman who looks like she's been through a lot, has taken on this equipment and has figured out how it works.  Fortunately they had a lot of the old wiring diagrams.  They even have the vintage waste basket that goes with it.  The museum has the upper two floors of the building and they have a lot there.  Here Naomi and Dennis with our tour guide.  Susanna and I came along also.

Today, for Dennis' birthday, I bought a really big lasagna.  Some months back, the local grocery store had some really good looking lasagna in their hot case.  I bought some and it was so good.  I thought, Dennis loves lasagna, maybe I should buy one for his birthday.  Negotiations commenced.  They said that they had a size that fed six and one that fed 12.  Since I was planning to have 7+, I thought I would get the bigger one.  They said they charged about $7/serving.  Which sounds reasonable until you do the math.  Actually they charged less ($70) and due to illness, etc, we only had 5 people.  And this was one honking lasagna, you easily could have fed 20.  And delicious too.  So we all ate and Susanna and Naomi got to take some home and we still had lots left.  Dennis and I estimate it weighed 15-20 pounds.

Happy birthday Dennis!  We went to fun museum.
Posted by azure at 7:22 PM No comments:

Family pictures from the Ginsburgh Family

My participation in the Daily City Photo project